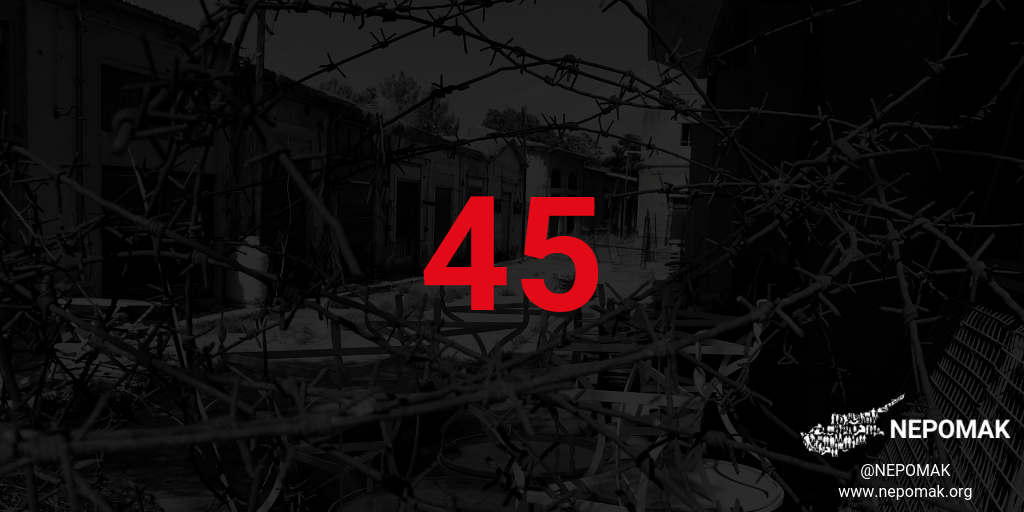 It is now 45 years since the invading Turkish army landed illegally in Cyprus by boat and by parachute. Brave Cypriots fought to resist the invasion but the size and scale of Turkey’s army outnumbered and overpowered them. As the years go by, we will never forget what happened in 1974.

The Turkish invasion began just 5 days after the democratically elected President of the Republic of Cyprus, Archbishop Makarios III, was overthrown in a treacherous coup d’etat by the Greece’s military junta and members of the Cypriot paramilitary organisation EOKA-B. Greece’s military rulers installed a puppet government in Cyprus while President Makarios narrowly escaped assassination and fled the island.

Turkey used the coup as a pretext for its brutal invasion of Cyprus on 20 July 1974. Turkey continued to expand its occupation despite the coup collapsing on 23 July (along with Greece’s military junta) and the constitutional government of Cyprus being restored with the President of the House of Representatives, Glafcos Clerides, as Acting President. Turkey continued until it occupied over 37% of the island and 57% of its coastline.

Although these events happened long before NEPOMAK members were born, the significance of 1974 has never been forgotten by young diaspora Cypriots. We have grown up hearing stories of what happened from our parents and grandparents who lived through the tragedy.

We will never forget 1974 and we will continue to campaign for a free, united Cyprus.

We will never forget those that stood and defended Cyprus against the coup and the invasion. Many of them made the ultimate sacrifice and gave their lives for our liberty. Their courage and love for Cyprus lives on in all of us.

We will never forget that over a third of our beloved homeland has been under occupation for 45 years. The unnatural division of Cyprus, enforced by the Turkish military and subsidised by Turkey’s economy, continues to this day. The status quo is unacceptable and we can never let it be normalised.

We will never forget that over 200,000 Cypriots became refugees because of Turkey’s invasion. The inhabitants of Famagusta, Kyrenia, Morphou, Rizokarpasso, northern Nicosia, and all the other villages in between these iconic towns, were forced to leave. We hope that one day refugees will have the right to return home as residents.

We will never forget that there are Cypriots living in enclaves in the occupied area of Cyprus, relying on aid from the free areas that is delivered weekly by the United Nations. Rizokarpasso and Kormakitis are notable examples of these enclaves, and their human rights are often violated. In 2017, the illegal regime operating in the occupied part of Cyprus placed a tax on food and other supplies heading to those living in enclaves, thus decreasing their quality of life – thankfully that decision has been overturned.

We will never forget our Cypriot compatriots living under occupation. They experience police surveillance, restrictions on freedom of speech and oppression. They are now outnumbered by the settlers sent to Cyprus from mainland Turkey. All Cypriots once lived together in the same towns and villages in peace. We dream of a Cyprus where all Cypriots live and prosper together.

We will never forget 1974 and its consequences, no matter how many years go by. We will always continue to campaign for a free, united Cyprus.

Today, Turkey is as aggressive and authoritarian as ever before. Turkey currently has drillships and warships stationed in the Republic of Cyprus’ Exclusive Economic Zone and Turkey uses frighteningly aggressive rhetoric towards Cyprus on an almost weekly basis. The reputation of Turkey’s President, Mr Erdogan, is plummeting across the western world as the realisation grows that he is becoming increasingly militarist and Islamist.

Turkey’s recent actions, as well as the legacy of its invasion in 1974, reaffirm why it should not have any role in a post-solution Cyprus. Turkey’s status as a guarantor power must end. In fact, the entire system of guarantees should be abolished because it is a colonial and outdated concept. Furthermore, Turkey’s occupying troops must completely withdraw from the island.

45 years since Turkey invaded Cyprus, NEPOMAK members will continue to fight for a just solution and for a free, united Cyprus. We want to see a Cyprus where Cypriots live and prosper together – free from foreign occupation, free from foreign interference, free from division, and united for the benefit of all Cypriots.