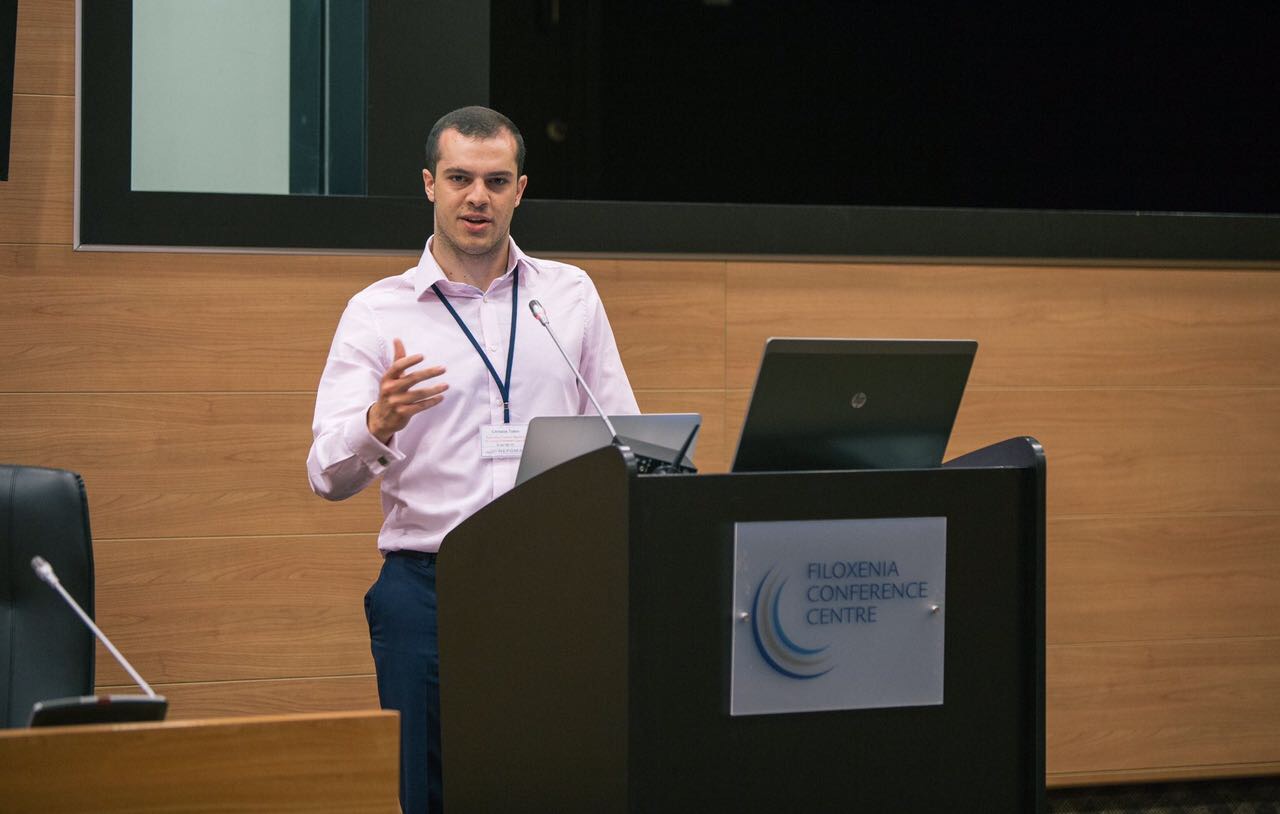 A passing of the baton took place in July earlier this year. Antonia Michaelides was succeeded as President of NEPOMAK by Christos Tuton, a 23 year-old who studied Philosophy, Politics and Economics at the University of York and now works at the National Federation of Cypriots in the UK, holding an important position by the side of Christos Karaolis.

What makes someone want to become President of NEPOMAK?

One of the things I’m most passionate about is bringing people together to work as a team and getting the best out of them to achieve a common objective. I’ve tried to reflect this in everything I do in life whether at work, playing for my school/university football team, as a brother or as a friend. I think that this passion, combined with a desire to continue the exceptional work of my predecessors, particularly Antonia Michaelides and Christos Karaolis, is what made me want to become a leader in NEPOMAK and eventually President of the organisation.

When I first joined the organisation I quickly realised how much of an impact every individual volunteer can have. I enjoyed taking on small bits of responsibility and having the opportunity to shape and improve the organisation together with my peers. I firmly believe in words famously said by John F. Kennedy, “one person can make a difference and everyone should try.” I very much encourage young people to go out there, be leaders, and make a difference.

What are your priorities in terms of actions/events in the near future and in terms of leaving the organisation in a better place when your tenure finishes?

Antonia Michaelides and several other key individuals have ‘retired’ from the organisation over the last few months and now we have a new team leading NEPOMAK. This marks the beginning of a new era for the organisation. One of my main priorities over the next few months is to get the new team working well together and to continue the excellent work that our predecessors have put in place.

In terms of actions and events, we are continually working towards improving our internships, scholarships and two flagship tours of Cyprus: NDCP (NEPOMAK Discover Cyprus Programme), which will take place in July 2019, and NCCT (NEPOMAK Cyprus Culture Tour) which will take place in August 2019. Applications for both programmes will open in December so we are preparing for that at the moment. A more immediate event that we are focused on is organising our biennial Executive Committee conference which we are holding in New York City in late December this year. This conference will see members of NEPOMAK’s global committee travel from all over the world to come together and discuss the organisation’s strategy for the next few years.

Our global committee as well as our eight regional committees are always working hard towards developing new initiatives to advance the organisation and services we offer. As President, I’m open to new ideas and I’m excited to see what the future holds for NEPOMAK.

In July of this year in Nicosia, NEPOMAK held its largest ever World Conference with around 110 young Cypriots from 11 different countries in attendance. I think this indicates that young Cypriots are involved and care about Cypriot issues. However, we cannot become complacent, and we must continue to engage people and provide opportunities for young Cypriots to connect with each other and the island of Cyprus.

NEPOMAK is always looking for ways to attract even more young Cypriots to our cause and we want to help preserve Cypriot identity, traditions and culture. Diaspora Cypriots feel varying degrees of connection to Cyprus and it’s our job as an organisation to be innovative and find ways to get these young people to grow closer to the island of their parents and grandparents.

I strongly believe that whatever one’s connection to Cyprus, NEPOMAK can offer them something: whether they have never been to Cyprus before and would benefit from going on NDCP or NCCT; whether they are interested in moving to Cyprus and want to undertake an internship there before committing; or whether the only thing they know is about the Cyprus issue and the ongoing occupation of 37% of the island by Turkey and want to help campaign for a free, united Cyprus.

How did you get involved with NEPOMAK and the National Federation of Cypriots in the UK?

As a young child, I had frequent contact with the organised Cypriot community in North London as my grandfather (Bappou) regularly took me to his place of work, the Cypriot Community Centre in Wood Green. However, I didn’t really appreciate the community around me back then. That changed when I was a bit older and my Bappou started to tell me stories about his life. Through those stories, I’d learn about the history and politics of Cyprus – British rule, the poverty people faced, the invasion, the refugees, the missing persons – but he’d also ask me for my opinion on the stories and encourage me to reflect on them. This had a deep impact on me and helped develop my interest in Cyprus and in the organised Cypriot diaspora – which led to my involvement in NEPOMAK and the National Federation.

One day in July 2014 I accompanied my Bappou to the Federation’s annual anti-occupation event in the Houses of Parliament when the then President of NEPOMAK, Antonia Michaelides, approached me and encouraged me to attend a NEPOMAK UK meeting. I found the meeting interesting and wanted to get more involved so I started to attend NEPOMAK’s events and attended NDCP in 2015. My involvement increased each year since then and I was elected Treasurer of NEPOMAK UK in 2016, Vice-President of NEPOMAK UK from 2017-2018, Internships Coordinator for NEPOMAK Global in 2017, and then eventually succeeded Antonia as NEPOMAK Global President.

How is the level of cooperation between NEPOMAK UK and the Federation, and also the Cypriot authorities? What more would you like to see be achieved in that respect?

There is extensive cooperation between NEPOMAK UK and the Federation, and it’s improving all the time. The Federation recognised that it had to modernise and bring younger people into its decision-making process, and so it voted to change its constitution to allow seven ‘youth members’ join its committee. Most of these ‘youth members’ were ex-NEPOMAK UK committee members and the constitutional change allowed them to become members of the Federation’s Secretariat. This has helped bring the two organisations closer together and now many NEPOMAK UK members attend Federation events and are more aware of the Federation’s work and vice versa.

The cooperation between NEPOMAK and the Cypriot Government is excellent – the President of the Republic of Cyprus, Foreign Minister and Presidential Commissioner for Humanitarian Affairs and Overseas Cypriots are among NEPOMAK’s biggest supporters and that is something that young diaspora Cypriots are extremely grateful for. Furthermore, there is daily contact and cooperation between NEPOMAK and the Presidential Commissioner for Overseas Cypriots, Mr Photis Photiou, as we work on various projects to provide more opportunities to young diaspora Cypriots.

The Cypriot diaspora movement is in a very healthy state yet much more can still be achieved – that is something for us all to work towards. Young overseas Cypriots must make the effort to learn about and then modernise the structures that the older generation have put in place. In addition, the older generation must share their knowledge and slowly allow the next generation to take over the reins of leading the Cypriot diaspora. When those two things occur – and I can see them happening already – we will further strengthen our diaspora and safeguard it for the future.

Politics affects every aspect of our lives and the world we live in and, quite simply, young people need to be a part of something that important. One of the many memorable lines of the brilliant High Commissioner for Cyprus to the UK, Euripides Evriviades, goes like this: “young people are not the future, they are the present and the future.”

He is entirely correct and there are few fields where this is truer than politics. Young people need to engage with politics and have their voices heard now in order to create the best possible society for their future. If you consider the voting patterns of young people in the 2016 European Union referendum in the UK it’s widely accepted that younger voters were more likely to vote for Britain to remain in the EU. However, areas with more younger voters had a lower voter turnout. In other words, the demand of young people to remain in the EU was overshadowed by older voters because young people didn’t maximise the potential of their voices and go out and vote in the numbers that they could (and should) have.

In NEPOMAK we encourage our members to be engage with politics wherever they live by getting involved in political parties and campaigns. It’s essential that our community’s voice is heard and that we continue to campaign for a free, united Cyprus that allCypriots can be proud of and benefit from.

Finally, how does it feel to have been elected to the post?

It’s a great honour to be President of this special organisation and I’m deeply humbled to have the opportunity to take this organisation forwards. I consider myself lucky to have such a strong team around me because it’s a daunting task to follow on from Antonia who did such a great job in the post.

I’m the first President of NEPOMAK who has only one Cypriot parent (my father is English and was born in Hull in northern England). I don’t imagine that when Cypriots left their homes and villages they believed that their culture and traditions would be so strongly preserved through the next generations born overseas and through mixed marriages. I think that it shows how far the Cypriot diaspora has come in terms of integrating whilst also successfully upholding its unique identity.