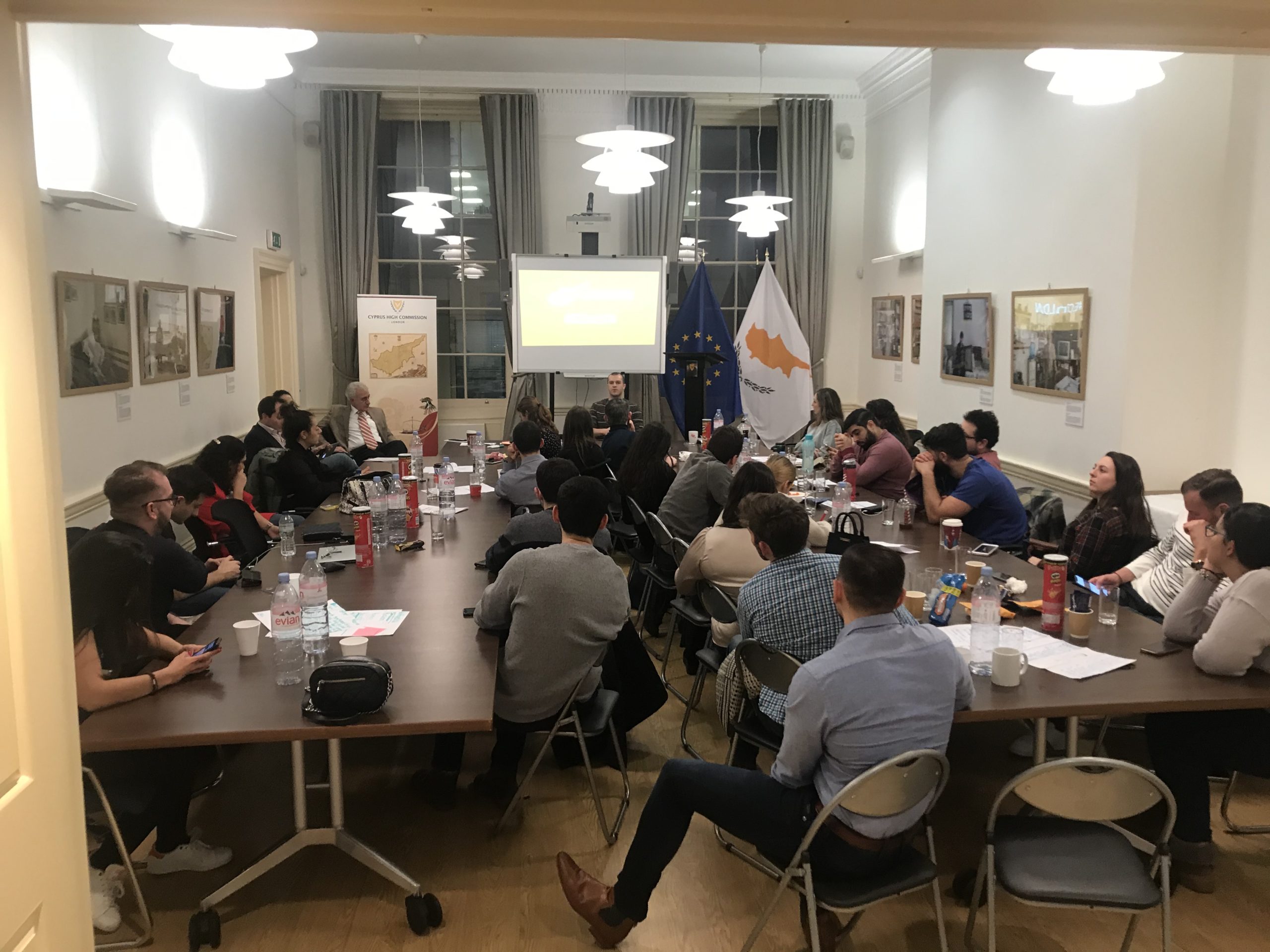 The NEPOMAK Global Executive Committee (EC) travelled to London and Paris for its biennial meeting in one of NEPOMAK’s regional branches. NEPOMAK representatives travelled from the USA, Australia, Greece, Canada, South Africa and the Netherlands to join representatives from the UK, and take part in a series of meetings, workshops and updates. Roughly every two years, NEPOMAK’s EC has travelled to one of its eight regional branches for a close-knit meeting of the organisation’s most senior committee. These meetings have been held in Canada (2002), New York (2003 & 2018), Australia (2005 & 2013), London (2007), Athens (2009), South Africa/Zimbabwe (2011 & 2015).

Delegates arrived in London on Friday 27 December and an opening ceremony was held that evening to welcome everyone and enjoy a traditional Cypriot dinner. Lord Andrew Adonis, the first UK Cypriot to serve in Her Majesty’s Cabinet, was the guest speaker and told NEPOMAK’s representatives of the value of connecting young diaspora Cypriots, celebrating our shared Cypriot heritage as well as the importance of youth engagement in public life. Lord Adonis said that a priority for the Cypriot diaspora must be “providing role models and opportunities that weren’t there for earlier generations of diaspora Cypriots, which will then provide a multiplier effect for the next generations… Each new group going through schools, universities, businesses, creative industries, sport and public affairs will have a huge magnetic effect on the community of young Cypriots in the diaspora and in Cyprus.”

The President of NEPOMAK also gave a welcome address and said that EC meetings in regional branches have been “invaluable in physically bringing together our diverse global team.” He continued, “NEPOMAK’s volunteers and members are spread out across the globe – across every time zone from California to Wellington. This makes our mission is even more difficult to deliver but that makes us even more proud of our successes.”

The General Secretary of NEPOMAK, Georgia Stavrou, invited other speakers to address the room and there were welcome speeches from: the President of POMAK, Andreas Papaevripides; the High Commissioner of the Republic of Cyprus to the UK, Andreas Kakouris; the President of NEPOMAK UK, Constantine Alexandrou; and the President of the National Federation of Cypriots in the UK, Christos Karaolis. Also in attendance were Bambos Charalambous, MP for Enfield Southgate; and John Pandazopoulos, Secretary of WHIPA.

For the following three days, the NEPOMAK EC held a series of meetings and workshops at the High Commission of the Republic of Cyprus in the UK to discuss aspects of NEPOMAK’s work, including a 2019 review from the President and updates from various coordinators. The Consul General of Cyprus in the UK, Theodoros Gotsis, gave an informative update on the latest developments on the Cyprus issue and Turkey’s aggression in Cyprus’ Exclusive Economic Zone (EEZ) from the Consul General of Cyprus in the UK; each regional branch gave an update and the EC discussed common challenges that the regions face; the EC also debated NEPOMAK’s priorities for 2020. The missing persons issue and climate change were discussed at length along with other initiatives. The High Commissioner of the Republic of Cyprus and the President of the National Federation of Cypriots in the UK joined NEPOMAK for the plenary session of the conference.

The formal meetings concluded on 30 December and NEPOMAK then spent a few days exploring London. The group visited many iconic landmarks, including Buckingham Palace, Trafalgar Square, the Tower of London, London Bridge, the London Eye, the Sky Garden, as well as boat tour of the River Thames. There was also a quintessential afternoon tea, a Premier League football match and a Cypriot meze dinner at a community restaurant in North London.

After exploring London, the group headed to Paris for a weekend of sightseeing and bonding as well as a welcome reception hosted by the French Cypriot community and the Cypriot Embassy in France. The trip to Paris marked NEPOMAK Rest of Europe’s first-ever event as a region which was a historic moment for NEPOMAK and acknowledged at the welcome reception. At the event, the President of the French Cypriot community and Vice-President of POMAK, Evagoras Mavrommatis, said that he was delighted to welcome NEPOMAK to France and said that “NEPOMAK is achieving the goals that were set when it was founded in 2002, especially at connecting young diaspora Cypriots across the world.” The Ambassador of Cyprus to France, Pantias D. Eliades, encouraged NEPOMAK to “dream big” and continue to educate themselves throughout their lives as broadly as possible but also about the issues facing Cyprus and its diaspora. The President of NEPOMAK emphasised the significance of the NEPOMAK Rest of Europe branch’s first event and explained that it has been made possible thanks to a small but dedicated group that have worked hard to expand NEPOMAK’s influence to Cypriot communities throughout the European continent.

Reflecting on the meetings and excursions, Christos Tuton commented, “I am delighted that our meetings have led to productive results for NEPOMAK and also that the trip as a whole has provided important bonding opportunities for our passionate global team. As young diaspora Cypriots it is vital that we bring people together and create friendships amongst our members that will last for decades, thus strengthening our global Cypriot diaspora and creating the next generation of community leaders.” He continued, “I would like to thank the National Federation of Cypriots in the UK and the High Commission of the Republic of Cyprus in the UK for their exceptional support in helping us realise our ambition of bringing the NEPOMAK EC meeting back to London after 12 years. I’d also like to thank the organising team that helped manage the logistics and put together a brilliant itinerary for us in both the UK and France.”