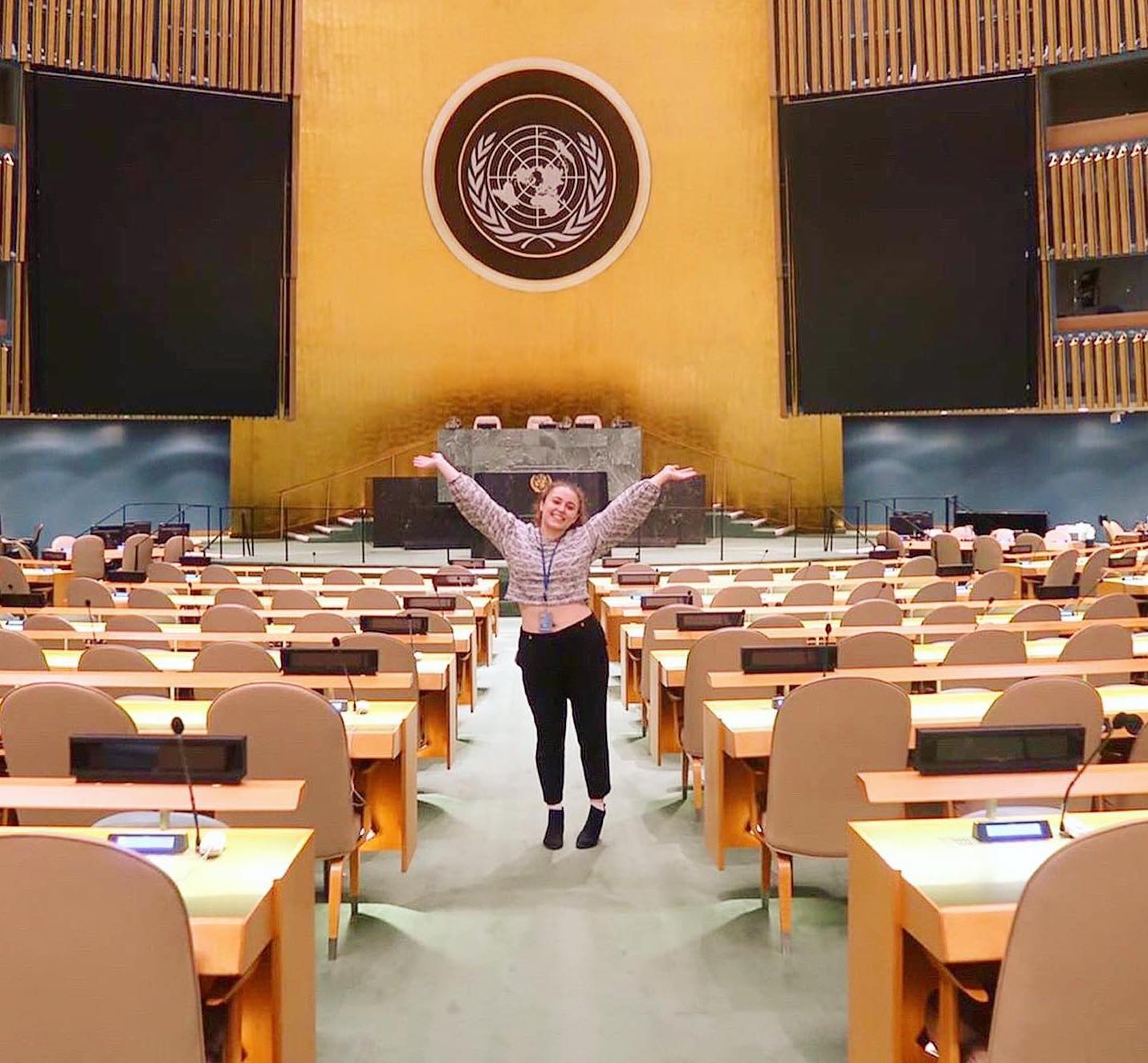 My name is Eleanor Nicolaides and for the past year I interned at the Permanent Mission of the Republic of Cyprus to the United Nations in New York City. It was by far the greatest, most rewarding experience of my entire life, and I will be forever grateful to NEPOMAK for providing me with this incredible opportunity!

My main role was to attend and write up reports on meetings at the UN, informing the Cypriot diplomats at the Mission and the Ministry of Foreign Affairs back in Nicosia on what was discussed and decided. I was so nervous for my first day of the internship, as it sounded so daunting, however I very quickly settled in. Everyone was so lovely and welcoming, and I greatly appreciate the support they gave me throughout the year.

This internship is the perfect opportunity to witness High-Level multilateral co-operation on a global scale. For example, three weeks after I started, I attended and reported on the High-Level General Debate at the 73rdGeneral Assembly in 2018, during which I saw dozens of Heads of State (including Theresa May, Emmanuel Macron, Justin Trudeau, Jacinda Ardern, Benjamin Netanyahu, and Hassan Rouhani). It was such a surreal week – I couldn’t believe that I was already trusted enough to be given the responsibility to solely represent the country of Cyprus at the most prominent political event in the entire world. The internship had completely exceeded all my expectations in just a couple of weeks. Other famous figures I saw throughout the year at the UN include Secretary-General Antonio Guterres, Vice President of the United States Mike Pence, Amal Clooney, Angelina Jolie, and Nikolaj Coster-Waldau.

Other types of meetings I went to were humanitarian briefings and resolution negotiations. At times, I felt like I was watching history happen right in front of me, especially at the Security Council which I regularly attended. For example, I attended an emergency meeting in November 2018 after Russia attacked Ukrainian vessels in the Kerch Strait and took 24 Ukrainian sailors prisoner. Tensions were extraordinarily high, with Russia trying to justify their actions and Ukraine threatening to declare martial law. It again felt surreal, that I was responsible for reporting on this serious geo-political event for the Cypriot Government. It was amazing to be able to see the impacts the United Nations has on people all over the world.

I also attended European Union Coordination meetings around three times a week. These were a fascinating to sit in on, as it was a private, behind-the-scenes look at how the 28 Member States work together to achieve their common goals on a global platform. One of the most memorable meetings I had here was during the Venezuelan Presidential Crisis earlier on this year. Both Maduro and Guaido were sending delegations to a United Nations conference in Buenos Aires, and the EU needed to decide on a common approach on how to diplomatically act in this situation. The Buenos Aires issue was time sensitive, yet they also had to keep in mind how to deal with the larger crisis in the long term. The co-operation that I saw during these meetings was so impressive!

Living in New York was also a dream come true, there is nowhere else in the world that compares. The city is so full of opportunities with something new to discover every day. I made some incredible friends over there, and some of the things we did together were go to: all of the classic tourist spots (the Empire State, Statue of Liberty, and Central Park); Broadway shows; museums and art galleries (of which the best is the Met); NBC studios to watch live recordings of SNL; concerts and festivals; Instagram popups; food markets; and travel. During the year I was lucky enough to go to San Francisco, Yosemite, Miami, Toronto, Niagara Falls, Washington DC, Virginia, and Philadelphia.

I am so grateful to NEPOMAK for giving me the opportunity to live and work in New York for a year. Words can never truly explain how much I loved it and how much I want to return. To other members, I highly, highly recommend this life-changing experience!

Find out more about the internship at the Cyprus Mission to the United Nations here: www.nepomak.org/un-internships-nyc