Five participants from NDCP 2018 have shared their experience of the trip. They come from 3 different countries and have each written about a different aspect of NDCP!

Everyone we spoke to regarding NDCP said it was the experience of a lifetime, they told us it would be like nothing we’ve experienced before. As an avid traveller, I found that a little hard to believe. I’ve had so many “experiences of a lifetime”, I’ve built a school in Madagascar, trekked through the jungle, I’ve seen the colosseum in Rome, the leaning tower of Pisa, I’ve walked through the parks of Vienna, seen the Grand Canyon, sailed past glaciers in Alaska, of course I’d been to Cyprus before, but never like this. I think I can confidently speak for all of us when I say this trip was truly like nothing we’ve ever experienced and it was most certainly the best decision we’ve made in our lives.

The reason we all feel so strongly? NDCP brings people together in a way that you’d never expect. Even if you don’t factor in the wonderous excursions, the excellent lessons, and the amazing parties, the trip was enthralling.  The way we all bonded so quickly and so strongly was incredible, you wouldn’t be exaggerating to say there was some sort of spiritual guidance. Whether you knew everything or nothing about our language and culture, by the end of the trip you most certainly had a greater appreciation for it. But that’s enough from me; I’ll let my family – yes that’s what we’ve become – tell you all about the magnificent month we had! 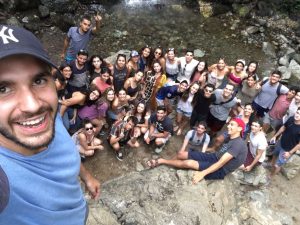 Being someone who was raised in the USA with only one Cypriot parent, I never became fluent in Greek. It was never really spoken around me and although I attended Greek school when I was younger, I didn’t seem to pick up very much of the language. But as I got older I started feeling guilty for never taking the time to learn a language that was spoken in my own home, Cyprus. One of the reasons I applied for NDCP was because I hoped to learn a lot more from the lessons offered at the University of Cyprus. When I arrived, I was placed in the beginners class at the university – those who were more experienced in the language took the intermediate or advanced class. My teacher, Ms Kalliope Matidou, was not only very intelligent and well-versed in both Greek and English, but she was a sweetheart and made our learning experience an amazing one. I felt immediately comfortable in my class and set a goal of learning as much as I could in the three weeks we had in the classroom. We began to learn how to read, write, and speak and it all started with the alphabet. She also showed us some Greek songs, which we all enjoyed, and even taught us one of her favorite Greek dances. The NDCP course was about complete immersion in Cypriot culture so we attended not only language lessons, but also dance and history lessons. During our dance classes we learned traditional Cypriot dances and well as some modern Greek dances. Some of my favorites were zeibekiko, zorba, and kalamatiano. In addition to learning the dances, I was also exposed to new music which I enjoyed very much. History classes helped us to further explore Cypriot culture. We learned about the geography of the country as well as the Cyprus problem. As a group, we learned lots of new information that we had never been exposed to.

At the end of classes, we had an exam on language and history which was a way for us to measure how much we learned over the 2 weeks. If we passed the exams, we would gain a certificate from the University of Cyprus School of Modern Greek. Studying for the exams was a fun experience of its own and we definitely had some laughs while going over the content and trying to stay on task. In all of the classes we had our friends by our side and it made it overall a more fun learning experience.

Despite having visited Cyprus many times throughout my life, I was surprised to discover that there were several places I had not yet visited, or even heard of. The excursions, the other compulsory part of NDCP, provided us with an opportunity to view the history and the culture of Cyprus first-hand, as well as from within a classroom. From a jeep safari tour through the Troodos mountains to visits to UNESCO protected churches and monasteries, nothing could bring us closer to our island than these excursions. One of the first places we saw, and, in my opinion, one of the most important for Cyprus, was the graves of the brave EOKA freedom fighters who battled for liberation from British rule, and were executed fordefending their home. It provided a sobering perspective of the treatment of Cyprus, and brought us all closer together as a result. In fact, every excursion brought us all closer together, whether it be: clutching the seat of a jeep for dear life as you swerve down narrow mountain roads (if they can even be called roads!), listening to our tour guide Katie sing at the Kourion theatre, or marvelling in awe at a mountain waterfall.  And that isn’t even everything the island has to offer. Cyprus has a rich, deep history which spans several millennia – to assume that one could see all there is in the span of three short weeks would be absurd, especially considering the history on the occupied side. That said, we are all extremely grateful to have been given the opportunity to experience Cyprus in a way many of us never had before. We were able to forge connections not just to our roots, but also to each other through these excursions. I’m not sure that’s possible anywhere else in the world. 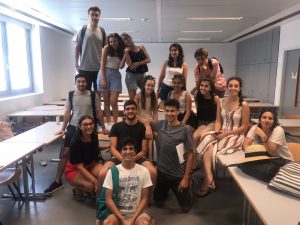 NDCP brings 40 complete strangers together from across the globe, 40 people who share only one commonality: our Cypriot heritage. At the end of 3 weeks we share so much more than just this. For me, the best part of NDCP was getting to know people from all over the world and not only getting to know them but building friendships that will surely last a lifetime. The walk to university was the perfect time to catch up on happenings of the night before and even classes don’t feel taxing when you are sat next to your best friend who is singing along with you to the traditional song you’ve just learnt. Coach rides are the places where real bonds are formed, and you will definitely have a DMC or two, that is, if all 40 of you are not singing your heart out to the songs that will become anthems of your summer. We created memories that will last a lifetime. Beach days with everyone were my favourite days: swimming in the sea and being bathed by the gorgeous Cypriot sun with a “cheeky” frapé. And how could I ignore all the evenings we spent together! Whether we were going out to a club and dancing the night away in Guaba or Ayia Napa, or spending the evening at home and simply playing ‘tavli’ and ‘spastra’, or playing some Greek music to dance to, you have the best of times and grow so close to every single person.

In all honesty, it’s the little things, like everyone picking up a phrase that will be used for the duration of the holiday, or the ongoing jokes that develop that bonded everyone together for life. Never did I think I would be able to say that I have best friends in South Africa, Australia and even the Czech Republic, but honestly these people made NDCP the most amazing trip it could be. Anyone that participates in the future will make Cypriot connections across the globe and will leave feeling that the world is a whole lot smaller and Cyprus is a whole lot bigger.

‘Belonging’ is a fraughted word on an island that has been repeatedly conquered and is now divided, but the NDCP combination of lessons, excursions and nights together connected us not only to each other, but also back to our roots.  I think what the trip gave us all, in different ways, was a sense of belonging. As someone who, like Nicole, is only half Cypriot, I never really felt like the ‘right kind of Cypriot’. The trip, and the conference with the rest of NEPOMAK, has assured me, however, that our diaspora comes in a vast and wonderful variety, and that it’s up to me to define what being Cypriot means in my life. What was important was that we all connected and bonded and discovered our differences and similarities in experience. This all made goodbye the hardest part. I think that’s when it really hit us. We might never be like this again: forty people from six different countries that have studied, explored and partied together, building bonds across cultures and continents, defining what belonging means to us.

The sun rose on the brutalist architecture of the University of Cyprus apartments. We rose to the aircon, unaware of the heat. We ate a breakfast of “Ximeromata” and stories-from-the-night-before: exhausted but excited for the next adventure. Another romance blossomed. Another round of odds. NDCP was a trip of dancing, laughter and exploration, and a trip that we are very grateful for. We would like to give a huge thank you to everyone that made it possible, and a huge recommendation to other young Cypriots. As we have learnt, if you take time to discover, you will be repaid a hundredfold.