NEPOMAK marked 15 years of contribution towards young overseas Cypriots with its largest conference ever in Nicosia last week. Over 110 young overseas Cypriots travelled to Cyprus from across the world to participate in the 9th NEPOMAK World Conference. Delegates from the UK, South Africa, USA, Australia, Greece, Canada, Zimbabwe, New Zealand, Germany, Denmark and the Czech Republic attended the conference and heard updates from Cypriot Government Ministers and held their own workshops to discuss NEPOMAK’s strategy for the future.

The Conference itself was opened by the President of Cyprus, Nicos Anastasiades, on Wednesday 25 July with a speech in which he thanked overseas Cypriots for their political, social, cultural and philanthropic contributions to Cyprus and said that they are “worthy ambassadors of Cyprus”.

During her speech at the opening ceremony, Antonia Michaelides celebrated the achievements of NEPOMAK over the last 15 years and looked forward to future successes and growth under the incoming leadership team. This was a major theme of the conference as new and more established faces came together to discuss a wide variety of topics and ways that NEPOMAK can further its work in bringing together young overseas Cypriots as well as supporting the President of the Republic of Cyprus in the search for a free, united Cyprus.

During Conference, delegates heard updates from Cypriot Government Ministers including Foreign Minister Nikos Christodoulides, Finance Minister Harris Georgiades, Energy Minister Giorgios Lakkotrypis, Committee on Missing Person representative Nestoras Nestoros, Greek Cypriot negotiator Andreas Mavroyiannis, as well as the leadership of NEPOMAK’s parent organisation POMAK and PSEKA about their latest work. There were multiple productive workshops with the Presidential Commissioner for Overseas Cypriots and Humanitarian Affairs, Photis Photiou, as well as workshops where NEPOMAK delegates planned new initiatives for the next couple of years and discussed how to improve NEPOMAK’s current programmes including NDCP, NCCT, and the internships and scholarships that NEPOMAK offers. NEPOMAK delegates left the conference with a great sense of optimism and excitement at what the next few years may bring for the organisation.

The 2018 NEPOMAK World Conference also saw a change in leadership of the organisation as Antonia Michaelides stepped down as President after being in the role for 4 years. At conference, Christos Tuton (UK) was elected as President of NEPOMAK and, in his acceptance speech, said that it was “an incredible honour to be elected President of NEPOMAK” and he also thanked Antonia Michaelides for her “exceptional contribution and service to young overseas Cypriots and for her inspirational leadership of NEPOMAK.”

Antonia Michaelides said in her farewell speech that “it has been both an honour and a pleasure to serve our community through NEPOMAK. I am delighted to see Christos Tuton elected as the new President of NEPOMAK and I have no doubt that under his leadership, the organisation will go from strength to strength. I wish every success to the new team.”

In recognition of her contribution to the organisation, the conference voted to make Antonia Michaelides an honorary president of NEPOMAK – she was also presented with a plaque and some small gifts. 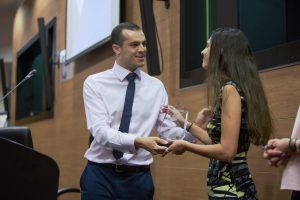 *NEPOMAK is the World Organisation for Young Overseas Cypriots and is run day-to-day by 150 volunteers aged 18-30 from around the world. It has activities in 40 cities globally and directly reaches 15,000 young overseas Cypriots. We are always looking for more enthusiastic, driven, young individuals to help develop our organisation. By getting involved, our members have the chance to learn new skills, challenge themselves and develop life-long friendships. Sign up as a member for free at www.nepomak.org/signup today or email [email protected] for more information.