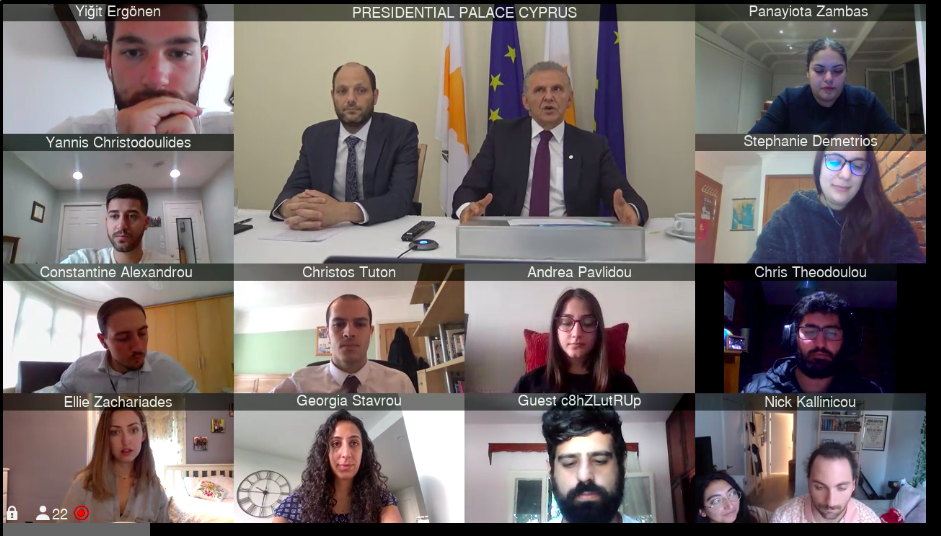 On Wednesday 29th July 2020, NEPOMAK held a virtual conference focussed on diaspora youth issues and priorities. NEPOMAK representatives from around the world were present to hear key updates and discuss new ideas to improve the work of the organisation.

Every summer, NEPOMAK holds a conference in Cyprus but widespread travel restrictions, due to the COVID-19 pandemic, meant that wasn’t possible this year. Despite the constraints, this virtual conference helped connect the Cypriot diaspora and inspired new ideas.

Presidential Commissioner Photis Photiou opened the virtual conference and expressed his firm support and appreciation for the work that NEPOMAK does. He said “you are the diaspora’s future leaders, the people we will rely on to promote the interests of our country.” Mr Photiou also highlighted the efforts to build closer relationships with young people of other diasporas. He pointed that efforts are being made with the diasporas of Greece, Israel, Egypt, Armenia as well as other countries.

The Chair of the Board of Directors of the Youth Board of Cyprus, Prodromos Alambritis, said he was pleased that a virtual conference could be arranged because “dialogue with the diaspora cannot and should never stop.” He expressed his disappointment that the pandemic had forced NDCP and NCCT to be cancelled this year because hundreds of diaspora Cypriots have benefited from the programmes over the years. The Youth Board of Cyprus helps sponsor NDCP and NCCT.

NEPOMAK President Christos Tuton highlighted the important role that NEPOMAK plays in the Cypriot diaspora. He said that, as generations pass by, diaspora Cypriots “will have less direct links to the island, so NEPOMAK’s central aim of ‘connecting young Cypriots’ becomes increasingly important.” Mr Tuton also noted that this year marks 60 years since the independence of Cyprus in 1960 and paid tribute to the people and presidents of Cyprus for “overcoming historic challenges to return stronger and build a brighter future for our beautiful island.”

The NEPOMAK representatives that took part in the meeting heard updates on the Cyprus issue and Cyprus’ foreign policy objectives from the Permanent Secretary of the Ministry of Foreign Affairs of Cyprus, Kornelios Korneliou; the missing persons issue from Presidential Commissioner Photis Photiou; and the President of Cyprus’ climate change initiative from the Head of Cyprus’ Climate Action Unit, Theodoulos Mesimeris. Christos Tuton also provided a summary of the previous two years of NEPOMAK’s initiatives and activities.

After the updates, there was a wide-ranging discussion with the Presidential Commissioner about various new diaspora initiatives and the delegates identified new priorities for NEPOMAK.

Other guest speakers included the Minister of Foreign Affairs of Cyprus, Nikos Christodoulides; Defence Minister Charalambos Petrides; Stelios Chimonas from the Ministry of Energy; and the diaspora ministers of Greece, Israel, Egypt and Armenia.